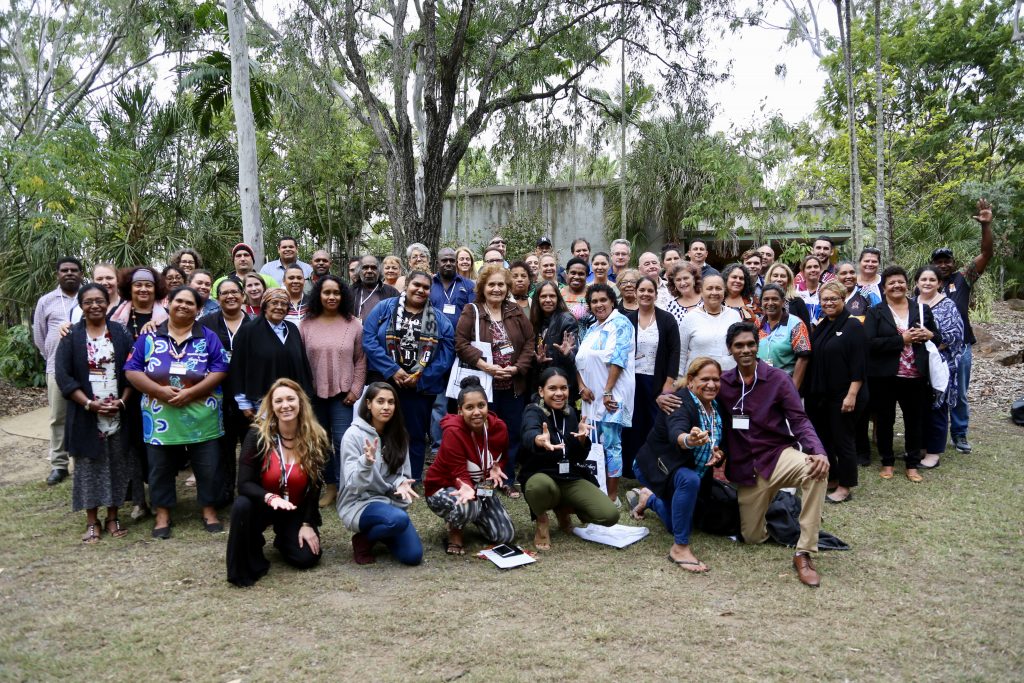 A full summary can be downloaded here as a PDF.

The forum was hosted by Darumbal Enterprises in Rockhampton and supported by the Indigenous Languages and the Arts Program from the Dept. of Communications and the Arts and First Languages Australia. It was an inspiring, energetic and fun event attended by over a hundred people.

The forum opened with a beautiful welcome to country by local Darumbal Elder Nyah Nyoka Hatfield followed by a message from the Deputy Premier of Queensland the Hon. Jackie Trad. A highlight of the morning were traditional dances by the Warrior Descendants.

Day one of the forum saw community members taking part in workshops and presentations that related to the successful delivery of language programs, with day two providing the opportunity for community members from across Queensland to have input into the discussions with DATSIP on developing a state language policy.

There was an overwhelmingly positive response to the two day program and keen interest in continuing involvement. Below is a summary of the program.

2M Language Services and the National Accreditation Authority for Translators and Interpreters (NAATI) presented on the need for accredited language speakers for translating and interpreting. This is an essential service across many areas of the government, including justice, health and education.

The State Library of Queensland holds rich resources for the research
of Indigenous languages, including published vocabularies and original materials such as diaries, wordlists and other language data collected from historical sources.

This hands-on workshop was a fantastic hit; participants learnt to cook a traditional meal with a twist, the instructions were entirely in language. The presenter and participants had to use body language and facial expressions to communicate, with the session demonstrating the effectiveness of language immersion to learn a language.

The pronunciation workshop gave participants a deeper understanding of the sounds that make up our languages. Participants examined where in the mouth the sounds are made and how to hold your tongue for each sound. The International Phonetic Alphabet was discussed as a useful tool for improving the pronunciation of our languages. Personal reflections from Yarrabah’s short five-year journey and ideas to learn/teach language sounds were shared to encourage attendees to continue their own important work.

RNLD operates across the country and offers a wide range of resources and training to support the documentation and revitalisation of Australia’s first languages. This session provided a summary of the organisation’s work, the training programs on offer and their plans for the future.

This workshop held in the beautiful outdoor area of the Dreamtime cultural centre focused on healing through language and art. It was an uplifting experience for the audience.

The digital classroom is a pilot program run with Central Queensland Language Centre and Tannum Sands High School. The program is run via Adobe connect, with students using headsets with a speaker and microphone to join in. The lessons are based on the language of the land and touch on cultural aspects of the language.

Since 2013, the ABC and First Languages Australia have been working together to deliver national projects for language communities across Australia. The presentation showcased a number of these projects, including broadcasting station IDs in Indigenous languages, the Mother Tongue project, This Place, the national place names project, The Indigenous Languages Song Competition, Marrin Gamu, and the new Aboriginal language “through the window” segments for Play School.

A selection are available on the First Languages Australia SoundCloud and Vimeo channels:
• https://soundcloud.com/first-languages-australia
• https://vimeo.com/firstlanguagesaustralia

The focus of this presentation was to promote the work of communities fundraising for their language projects. Annalee presented ideas and examples of the many different ways to fundraise and described the planning needed to successfully raise funds for language activities.

Prior to the forum, fourteen people translated Our Land Song into their languages. For the workshop, attendees broke into five groups each learning
the song in two or three languages. After the session the groups came back together to perform the songs to the larger group.

The Our Land Song workshop was a beautiful wrap up to the first day of the forum with all participants relaxed and enjoying the opportunity and challenge of learning to sing in another Queensland language.

The second day of the program began with presentations and facilitated discussions around the key areas of government that are active in supporting Indigenous Languages.

An introduction to the State Library’s Aboriginal and Torres Strait Islander Languages Strategy.
The principal goals and directions under the strategy include:
* Support capacity of the community to research & manage their language;
* Increase access and discoverability of language materials within State Library collections to support the growth of local knowledge of groups;
* Assist Indigenous languages workers in new media & emerging technologies to record & document their languages;
* Facilitate networking opportunities to share ideas, best practices and concerns regarding the revival and maintenance of languages in Queensland; and
* Raise broader community awareness & appreciation.

This presentation focused on schools implementing a traditional language program and advice on how the Department of Education can support teachers and school leaders to align their language programs to the Australian Curriculum.
The presentation included the following topics:
* Benefits of developing language programs aligned to the ACARA Framework for Aboriginal Languages and Torres Strait Islander Languages
* Planning documents for assisting this process
* Regional and Central Office support available for implementing traditional languages as the language element of the school’s curriculum
* Discussion points to ask the forum:
* What advice should we be giving to principals around community engagement?
* How can language centres and community organisations best engage with schools?

This facilitated group discussion examined how languages can play a role in the work of Queensland’s Department of Justice.

A case study looking at examples of using language in tourism.

Rory O’Connor from the Yugambeh Museum talked about working with major tourism partners, such as Dreamworld and the Commonwealth Games, to embed language in their major attractions.

Ron Beezley talked about the use of language in ranger activities and tourism
endeavours across the Lake Eyre Basin Indigenous Land and Sea Ranger Program.

This presentation looked at how languages are crucial to Aboriginal
and Torres Strait Islander health and wellbeing and explored how they must be acknowledged and addressed to improve health outcomes for Indigenous Queenslanders.

Following the presentations, DATSIP facilitated discussions towards a Queensland Indigenous Language Policy.
Participants broke into five smaller groups with each group discussing key topics and issues, including:
* What are the key Queensland language policy issues (defining the problem to be addressed by a policy)?
* What should be the vision and guiding principles to drive policy development & outcomes?
* What are we going to do (develop policy, strategies, initiatives, by partnering with community and all levels of government)?
* How will we do it – policy development process, co-design and engagement, strategies, and actions (short, medium and long term)?
* What will success look like for community and government? E.g. improved community wellbeing through strong connection to community and culture, languages are being preserved and maintained, improved public sector cultural capability and better service delivery, improved social and economic participation outcomes?

Each group then presented a summary of their discussions with key points identified. DATSIP will collate the results and draft a consultation paper to support community engagement and co-design steps.